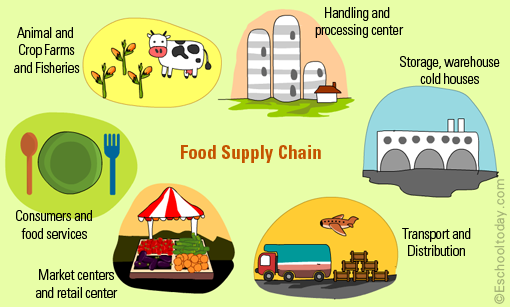 Are you worried about food-related terrorism? I am. The food supply chain in the United States is a delicious target for terrorists. The colossal size and the complexity of mass food production and distribution makes the food supply chain vulnerable to attack and difficult to protect. Intentional tampering can occur at any level, within the entire network, from farm to table.

Since the dawn of man, poisons and toxins have been used to kill. They’ve endured as popular methods to murder because they’re very effective and hard to detect by the victim. The perpetrator doesn’t even have to be present at the crime.

Unintentional contamination results in thousands of deaths every year from foodborne diseases. Hundreds of thousands of people are sickened and many end up hospitalized. It’s hard to pinpoint where the contamination occurred and how to control the outbreak.

What if the contamination was deliberate? Terrorist groups that are well-funded have the means to purchase the components needed for bioterrorism. They could have competent scientists, in their ranks, that have the knowledge of how to culture lethal toxins or how to obtain them from nature. Some examples of toxins, bacteria, and poisons that could be spread purposely include E. coli, listeria, salmonella, botulinum, cyanide, and anthrax.

At the production level, introducing crop and livestock diseases would have a devastating effect on the economy due to crop failure and livestock deaths. Food-related terrorism could happen at the processing level. Radicalized employees or unscreened seasonal workers could have access to an important component of food and drink manufacturing. Sabotage could take place during shipping or distribution. It could occur at the retail level where the food is purchased by the general public.

Bioterrorism doesn’t have the same drama as an attack involving firepower or bombs but the outcome is the same. Deliberate tampering with the food supply chain could result in widespread casualties and have serious economic repercussions.

And it doesn’t have to be carried out by a large force of enemy combatants. What about the lone wolf? The one who is in our midst pretending to be our fellow American?

3 Horrifying Scenarios That Will Keep You Up at Night

Stealthy Supermarket Slayer. Automatic misting machines are used by supermarkets to keep fruits and vegetables hydrated and fresh looking. These machines have filtration systems that trap contaminants to prevent clogging. The filter basket is a potential point of access where poisons or toxins could be deposited via liquid or pellet form. A steady stream could be administered and no one would be the wiser. Impersonating a store associate wouldn’t be difficult as uniforms are standard and easy to imitate. The misting machine would likely be unsecured. This scenario would be a fast way to deliver toxins to a large number of innocent people. Whole families could be wiped out after sitting down to enjoy a family meal.

Bulk Bin Butcher. Do bulk food bins freak you out? They stock items from spices to dog biscuits and everything in between. Stale food, cleanliness, and unrestricted access by a large, often sick, population concern me. Coughing. Sneezing. Dirty hands. It happens. Now, throw a bad character into the mix. A terrorist could easily sprinkle a liquid or powder into those bins. A backpack water reservoir could be filled with liquid toxins. The drinking tube could be run down an arm and retrofitted with a hand squeeze pump to administer lethal doses. A workout resistance band could double as a receptacle for powdered toxins. Fill and loosely tie off the ends to allow for minimal flow. Wear the resistance band like a mitten string under your coat. So, that guy over there…is he shopping or does he have a disaster up his sleeve?

Soup & Salad Slaughterer. It’s been done before and it will be done again. In 1984, members of the Rajneeshee cult poisoned salad bars in Oregon making 751 people sick with salmonella. Our Bulk Bin Butcher is so happy with his extermination equipment that he decides to go on an epic culinary adventure. Restaurants that have buffet and salad bars would be his targets. A dash of this and a sprinkle of that produce a recipe for an agonizing death. Food attendants who are restocking buffet trays are too busy to notice his actions.  Could that slow guy ahead of you be up to no good?

What can you do to protect yourself from foodborne terrorism?

Be vigilant. Take stock of your surroundings and report any suspicious behavior that you witness. In the event that you become aware of an unusual or questionable substance in your vicinity, alert nearby people and move away from the source. Contact emergency services if anyone has worrisome symptoms or has succumbed to the effects of the substance.

If you suspect food tampering, do not consume the product. Contact the proper authorities immediately. The FDA  provides information about food tampering and whom to contact.

A good precaution to take is to stockpile emergency food. The most convenient option would be MREs (Meal, Ready-to-Eat). These military food rations will supply you with complete and nutritious meals. They are fully cooked and ready to eat. Or you can heat up your MREs with the flameless ration heater and enjoy hot delicious meals anywhere. MREs are a shelf stable food source and they can last for up to five years depending on the storage temperature.

MRESTAR is your trusted supplier of the best and freshest tasting MREs on the market today. We can operate 24/7 in an emergency situation and we take your emergency preparedness needs very seriously. You can count on us to keep you well fed until the food supply chain returns to normal.